Katmai. Home of the Great Bear.

A popular attraction at the park is the Valley of Ten Thousand Smokes. The volcanic geology of the park makes for rugged but scenic landscape.

Katmai is a popular fishing destination, with the Alaska Peninsular feeding into the world renown Bristol Bay salmon fishery. The fishery is likely the largest wild salmon run in the world.

All those salmon underpin a rich and diverse biota. The sovereign of that ecosystem is without question the great Brown Bear, Ursus arctos. The Katmai brown bear is one of the largest (terrestrial) predators on earth and can weight over 1400lbs.

There are an estimated 2000-2200 bears within Katmai Park and Preserve, making this park one of the great bear viewing and bear photography locations in the world.

Alaska natives The area within the park show a history of human inhabitation and visitation lasting over 6000 years. Local native people are Alutiiq. Bears, bears and more bears. And seals, sea otters and bald eagles. Alaska as it gets. 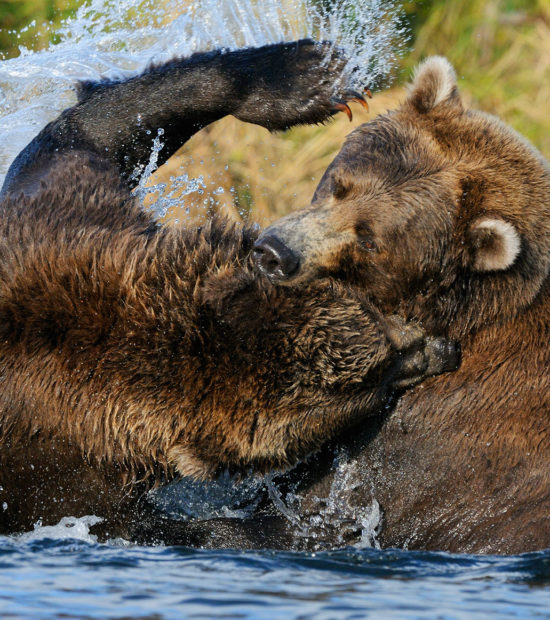 Fat Bears in the Fall

The Fat Bears of Brooks Falls. Alaska. You. And Your Camera.

Hey Folks, Just back in for a day or so between trips, and thought I’d post a photo from this last trip; the Coastal Brown Bear Photo Tour. So, of course, I’ll post a photo of a Harbor Seal, instead of a bear. We had a few great days with the bears, in Geographic Harbor, […]

Hey Folks, Sorry for the delay again, I’ve been in the field, and still catching up with everything here since getting out; And part of that catching up involves packing for the next trip, where I’ll be leading 2 sold out photo tours to Katmai National Park for the Grizzlies in the Fall trip. Definitely […] Brown Bears of the Alaska Coast

Hey Folks, Here’s an image taken this past summer at Hallo Bay, in Katmai National Park. The sow has 2 cubs, and this one was just finishing nursing from her when I made this photo. The other sibling, a male, had taken his fill already and wandered over to a nearby wood pile to explore […]

Hey Folks, Slowly catching up on image processing and whatnot after a full season of adventure. This year I ran a few new trips, which I’m looking forward to continue to explore over the coming years, but also enjoyed returning to some of the old favorite haunts. This image if from the Grizzly Bears in […] Image of the Month, July 2015 – brown bear on whale carcass

Hey Folks Just back from a great brown bear photo tour to Katmai National Park with some fun folks, where we got to witness some fantastic brown bear viewing and photography opportunities. Absolutely awesome! This one is from our 2nd last day, where we found a brown bear (or group of brown bears) feeding on […] Pebble Mine and Protecting Pebble Creek

Proposed Pebble Mine potentially affects all of us who visit the Alaska Peninsula and watch and photograph the coastal brown bears of Katmai National Park and Lake Clark and even Kodiak. Sometimes you get so close

An adult grizzly bear standing, back turned, mouth open, in long grass, Katmai National Park and Preserve, Alaska. A discussion of how much nature photography is in the hands of nature, and not the photographer. Let’s talk about a trip to Katmai.